You can play Bloxinies II on this website so you don't need to download and install the game on your computer. We recommend to use Google Chrome when playing DOS games online.

Bloxinies II is a sequel to Bloxinies that features generally similar gameplay, but updates the visuals to 256 colour graphics and adds a two-player mode.

As in the original Bloxinies, the objective of each level is to direct the smiley face protagonist to collect all gems on the screen, which unlocks the exit door. This apparently simple task is complicated by the presence of enemies, traps and other obstacles. The two-player mode uses its own levels, and this time, both characters must reach the exit once all gems have been collected. In addition, the original Bloxinies level set is also included.

The game was released as freeware and includes a level editor and the entire source code. 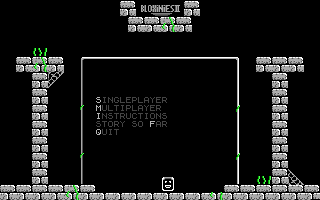