You can play Blupimania on this website so you don't need to download and install the game on your computer. We recommend to use Google Chrome when playing DOS games online.

Blupimania is an isometric-view puzzle game featuring the trademark egg-shaped Blupi characters (also known as Eggbert in the English-speaking world) that were created by the Swiss developer Epsitec. The core idea of the game can be compared to that of Lemmings: you need to steer one or more Blupi to the exit, marked by a purple balloon. Depending on the scenario, this task is accomplished by either manipulating the environment, or controlling Blupi directly, or both.

The game is primarily intended for kids starting from a rather small age, which is reflected in the general visual aesthetic of its design and the cute protagonists. However, some of the more difficult puzzles are rather intricate and can be quite challenging for adults as well. The scenarios are split into four sections of increasing difficulty, with the first set being basically a prolonged tutorial. There are many different elements that the characters can interact with, allowing for a much greater variety of playing situations than in Lemmings for example. The game also includes a scenario editor for the user to create their own puzzles.

Blupimania was originally sold as a shareware / commercial product, with just a small sample of levels from each set. In October 2017, Epsitec declared the game freeware, and the full version can be now downloaded from the official site (please see the links section below). 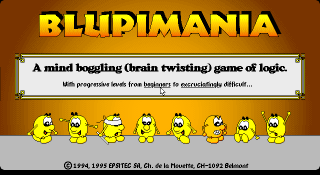