You can play Bluppo on this website so you don't need to download and install the game on your computer. We recommend to use Google Chrome when playing DOS games online.

Bluppo is a Boulder Dash like puzzle game for one or two players. Single-player levels are usually confined to one screen, similar to Trugg and Die Pirateninsel. The game tries to give more sense to the usual Boulder Dash mechanics by placing the action under water - so the main character Bluppo can still swim in all directions while boulders fall down to the ground when their support is removed.

Accordingly, the objective is to catch a certain amount of fish and return to the surface before Bluppo's oxygen supply runs out. Some fish will sit where they are, but others move around the level erratically, making them not easy to catch. There are also fish types that will do nothing but block the player's way. Two players can simultaneously compete against one another on the same computer in split-screen mode, using the keyboard to control their characters.

Bluppo was marketed as shareware, with the registered version featuring 80 single-player levels and 80 more two-player levels. 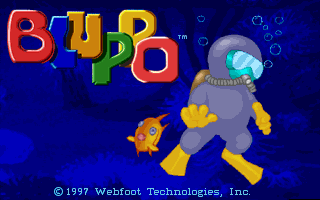