Press Ctrl+Q to quit the demo.

A versus fighting game made in a style similar to Street Fighter II, and originally released for Amiga computers. There are 10 characters and multiple stages showing various places around the globe, with some sort of international tournament going on.

There are two different playable demo versions of this game. One has the Shaolin Temple stage and allows to play as Nik or Dan. Another has the Ninja Cavern stage, with Dan and Ninja as playable characters. Both the single-player mode and the two-player mode are supported. 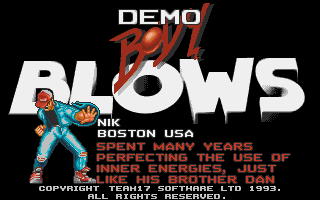