You can play Bomb Blast on this website so you don't need to download and install the game on your computer. We recommend to use Google Chrome when playing DOS games online.

The full version of the game was never completed. Two playable beta versions were released, with some of the planned features not implemented.

Description (by Software of Sweden)

Bomb Blast is a single/multiplayer game for Amiga and PC. It is a sort of Dyna blaster / Super Bomberman game.

The game is for 1 to 5 players. You can choose between normal mode or battle mode. In normal mode you are one player and fight against the monsters. In battle mode you fight against your friends. The rulez are simple you lay out bombs and tries to kill you opponents and pick up useful bonuses. There are lots of bonuses like timebomb, more bombs and longer flames. Beware of monsters, other players bombs or weapons and mines. There are five worlds which you can play in: Forest world, Snow World, Water world, Desert World and Volcano World. In each world there are 20 levels and one big boss. In Battle mode you can play Randomized levels. 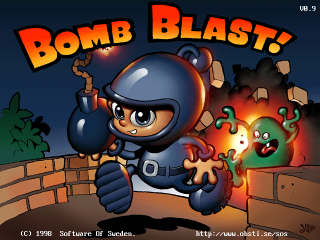