You can play Bomber on this website so you don't need to download and install the game on your computer. We recommend to use Google Chrome when playing DOS games online.

In Bomber, you control a B-29 (as said in the manual) bomber flying towards an enemy base, with the objective of staying alive while taking out as many targets as possible.

The enemies come in two varieties: helicopters and stationary anti-air cannons. Accordingly, you can use bombs and onboard guns to deal with ground and air threats, respectively. A single hit from enemy fire will result in losing a life (apparently the B-29 is made of cardboard). If there are lives left (you start with three) the bomber respawns immediately -- if you happened to be in the path of several enemy shots this means instant game over, because unlike other games with similar mechanics, you are not granted a small period if invulnerability from enemy attacks.

Manoeuvring in this game is slightly different from your typical vertical shmup. You move left and right as expected, but if you press forward the plane will speed up, which is useful when you want to avoid enemies rather than shoot them. Pressing the down arrow will slow you back down.

There seem to be no powerups to be collected, and the entire game world appears to consist of nondescript grassy (or perhaps forest-y) terrain underneath, dotted with samey AA cannons and samey choppers flying at you over and over. Every 10,000 points you get an extra life.

The shareware version does not have certain extra game modes allowed to registered users, and does not support cheat codes. 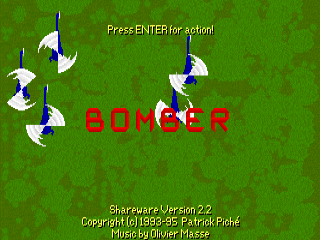