You can play Break Machine on this website so you don't need to download and install the game on your computer. We recommend to use Google Chrome when playing DOS games online.

Break Machine is a stylish and challenging Breakout like game with colourful graphics and a level editor. The main challenge comes from the various bonuses that fall from destroyed bricks, which may contain not only useful powerups, but also devious power-downs including but not limited to darkening the playing field, speeding up the ball, reversing the left and right directions of the controls, and everyone's favourite, making the paddle entirely invisible.

These power-downs can severely mess up the player's progress, which is exacerbated by the fact that no bonus description is provided in the game, so the player must find out which bonus does what by trial and error. Because of this, it is often a good idea to avoid picking up any bonuses unless you can't avoid it at all.

Another feature not found in some of the other Breakout clones is that if the ball hits the edge of the paddle from a certain angle, it will bounce straight off the playing field.

In addition to the block-breaking part, there are stages where you face a boss monster called WormTro.

Break Machine was originally marketed as shareware, with only a portion of the full game's 50 levels available and no level editor in the unregistered version. Eventually this switched to cardware, i.e. you could pass around the full game but were requested to send a postcard (with a possible donation of your choice) to the authors. Today, the latest version is officially freeware. 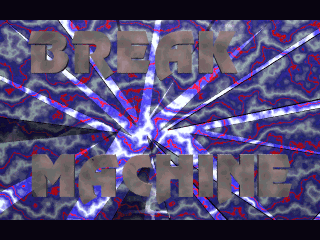