Brixor is a ball-and-paddle brick-breaking game that puts in a few odd twists. For one, every single brick in the level releases what the game calls a "bowl" when broken, which is essentially a large ball that bounces around like the ball controlled by the player. You absolutely don't want to get the paddle into contact with any of these "bowls" as it will result in damage, up to the complete destruction of the paddle (somewhat like in Enigma), which in case if you have no spare bowls left, means game over. Since the bowls bounce around, it becomes tricky to avoid them, and also harder to keep track of the ball.

Between levels, you get to a shop where you can purchase weapons, ammo, energy and extra balls/paddles. Credits for this come from the destruction of bricks and also bowls, but you need a weapon to shoot bowls so you can sell them in the shop, and you won't be getting one until later into the game because you've not enough credits. Not much fun eh? You can turn off the entire shop-n-bowl thing in the game options, but then it will be just break all bricks with the ball. No bonuses, no weapons.

Brixor was sold as shareware, with the demo version coming with 15 levels not found in the full game. The registered version has 150 levels. 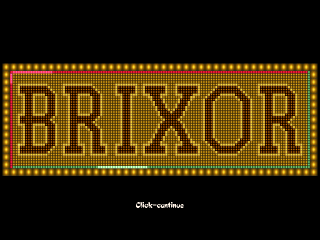