The demo version includes two playable characters and one arena.

The fur is about to fly in GameTek'sincredible hit, Brutal: Paws of Fury. This is pure power unleashed. A martial arts confrontation with masters drawn from the far corners of the earth.

Brutal features a martial arts team, assembled from the best fighters in the world. The only difference is that these fighters are animals, each with his or her own moves and strategies. Players will get to know the mystical beliefs and fighting styles of Rhei Rat, Tai Cheetah, Kung Fu Bunny, and the rest of the fighters the Dali Llama has assembled in his search for the World's Greatest Warriors.

Even though the characters in Brutal embody important personal virtues and take themselves very seriously, there is a humorous element in Brutal unrivaled by any other "beat-em-up."

Are you ready for the power of the Animal? Kick! Punch! Throw! Spring! Gloat over your victories in a frame-by-frame instant replay. But watch your back. Surprise is the ultimate attack.

Play in teams or head to head with up to eight people. So get your paws on it -- if you dare. This game is so cool, it's BRUTAL! 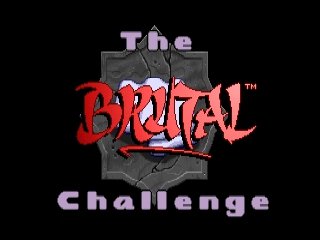