NOTE: Interplay released this game's source and data as freeware in 2005. A free Windows port titled Race Into Space is available (see the links section below).

One small step for mankind, one giant leap for you... if you've got the right stuff to land a rocket on the moon. And if you can do it before the Russians.

In Buzz Aldrin's Race into Space Enhanced CD-ROM, you'll experience man's greatest adventure with actual footage of historic US and Soviet space missions. You'll train and recruit astronauts and cosmonauts. Utilize US or Russian space equipment for your flybys, emergency rescues and lunar passes, orbits and landings. Research and develop the hardware you'll need for the mission, then guide your team into space. Mission Control will even give you reports of your progress.

But remember, the Russians want to get there first, so you've got to make the right decisions every step of the way. With nine levels of difficulty and 20 different approaches to the moon, you're in for a challenge and education that's out of this world. 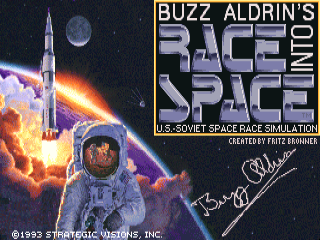