You can play Castles II: Siege & Conquest on this website so you don't need to download and install the game on your computer. We recommend to use Google Chrome when playing DOS games online.

You can download the full version of Castles II: Siege & Conquest from the download store listed below.

Ever want to run your own kingdom? In Castles II: Siege & Conquest Enhanced CD-ROM, it's all yours - if you've got the mettle of a monarch. More than four unbelievable hours of professionally-acted game plots with amazing, digitized speech, black and white movie footage and a fascinating BBC documentary on castle building takes you back to the 14th Century.

You want to be King of France. But to get it, you've got to build an empire by forging diplomatic alliances with power-hungry barons, mine the land for valuable minerals, feed your people and defend your land. Accomplish these tasks, defeat your opponents and you've got the job!

With four levels of play and more than 40 intricate subplots, you'll never want to leave the medieval challenge of Castles II: Siege & Conquest. It's the only way to rule!

The crown of victory awaits. 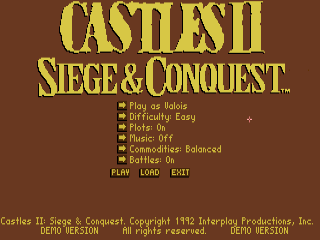