You can play Chopper Commando on this website so you don't need to download and install the game on your computer. We recommend to use Google Chrome when playing DOS games online.

Mark Currie has released this game as freeware.

Chopper Commando is a side-scrolling game that is somewhere between shooter and aircraft simulator. Possibly inspired by Sopwith, here you control a military helicopter armed with a machinegun, bombs and missiles. As in a typical flight sim, there is a roster of pilots that get promoted as they complete their assignments, with missions selected randomly every time a game is started.

The CGA graphics are very simplistic, but the game controls are not. Pressing arrow keys increases or decreases throttle and altitude, and careful flying is key to success in this game. Even if the player's helicopter is shot down, there's a chance of survival for the pilot by bailing out (again, like in a full-fledged sim).

Author Mark Currie initially marketed Chopper Commando as shareware, but on 31 December 2005 he agreed to release the full version 2.56 as freeware along with the source code. Later, Harvey Patterson of RGB Classic Games released an update with some code fixes, updating the game to v2.57. 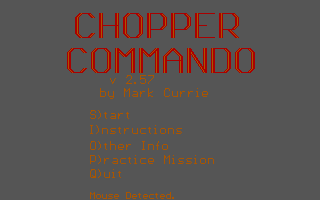