You can play Christmas Carnage on this website so you don't need to download and install the game on your computer. We recommend to use Google Chrome when playing DOS games online.

Cynics and scrooges who enjoy bad taste games can rejoice at last, for in Christmas Carnage there is finally a game for you. Anyone who enjoys the sanctity of the holiday season and the concepts of peace and goodwill would be better off avoiding it, as it doesn't exactly share your ideas. However, perhaps a greater reason to give this one a wide berth would be the fact that it isn't very good. After a needlessly gratuitous and graphic intro sequence which sees Santa Claus on the receiving end of a shotgun blast from a decidedly un-Christmassy snowman, the game settles down into a strict and rather predictable formula that reveals the game's lack of imagination and originality.

It's basically a fairly simple variation on Space Invaders, Missile Command and Operation Wolf and which sees the player in control of a little tank that can shoot out destructive cannon fire. Various Christmas-themed sprites like happy elves and reindeer pulling sleighs scroll across the screen and it's your task to blow them out of the sky, racking up the points as you do and losing them for letting anyone escape.

That's pretty much all there is to the game, with later levels cranking up the challenge and it is pretty much just an exercise in getting high scores. In this respect, the game is quite fun, albeit in a simplistic way, but it is nothing more than a straightforward time-waster. The graphics and sound are cheery and bright, with big chunky sprites and some nice effects, but little else to get excited about and once the novelty value of shooting Christmas characters has worn off, you are left with a shallow, rather dull little shooter. 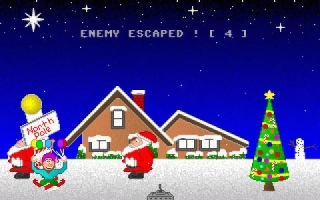