You can play Cobra Gunship on this website so you don't need to download and install the game on your computer. We recommend to use Google Chrome when playing DOS games online.

Use the mouse or keyboard to control the helicopter, press E to change the direction of flying.

Cobra Gunship is a mission-based side-scrolling action/shooter game where you fly a combat helicopter, quite similar to Chopper Commando, but with high-resolution, pre-rendered graphics. The story takes place during a fictional conflict in the Middle East, where a rogue group of mercenaries takes control of oil resources, and local governments hire a group of skilled military experts to thwart the takeover.

The player acts as the group's helicopter pilot, tasked with various missions in enemy territory. These are non-linear and may be played in any order as more scenarios are unlocked in the mission tree. Cash earned by completing assignments and picked during missions can be spent on purchasing ammo, equipment and upgrades for various helicopter systems.

Cobra Gunship was sold as shareware. The unregistered version allows to play the first six missions. 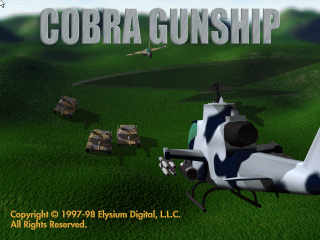