You can play Crazy Cows on this website so you don't need to download and install the game on your computer. We recommend to use Google Chrome when playing DOS games online.

Crazy Cows is a turn-based tactics game where you control - you guessed it - squads of anthropomorphic cows that duke it out against each other (the teams are grey cows versus brown cows) using a variety of weapons like katanas, shotguns, bazookas, magic staves etc. This weapon diversity and the visual style will likely remind you of Cyberdogs/C-Dogs somewhat, but combat-wise the game leans towards Jagged Alliance.

During each turn, you order your cows to either move or attack, which consumes movement points (MUs) until none are left for the current turn. If a cow is ordered to walk into a cell with a new weapon/gear, it will pick it up and drop the currently used weapon (if available). Thus you can change the cows' specialization, but it will deplete their MUs for the rest of the turn. Similar to Warcraft or Dune II, the map is initially covered in darkness and needs to be gradually explored by your units.

The game has a single-player campaign, as well as skirmish mode for one or two players, and a level editor for user maps (about a dozen were created by fans and available from the authors' website). Crazy Cows was released as freeware. 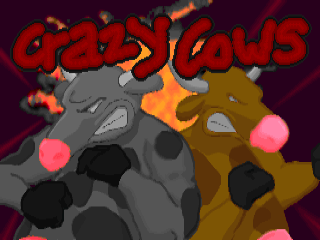