You can play CyClones on this website so you don't need to download and install the game on your computer. We recommend to use Google Chrome when playing DOS games online.

Earth is in trouble.

In the year 2010, the Advanced Ideas Corporation (AI Corp) discovered the remains of an alien scout ship which had crash-landed on earth. The craft, its technology, and its crew were unlike anything the world had ever seen.

Three days after the scout ship crashed, an alien Mothership arrived in orbit. striking without warning, alien attack forces quickly commandeered crucial strategic points and put a stranglehold on the superpowers of the world. Earth defense forces retaliated with every means at their disposal but it soon became evident that the aliens were more powerful.

Tissue samples taken from the bodies of the aliens on the scout ship confirmed the horrifying truth: The aliens were cloned, cybernetically-enhanced humans-deadly machines which killed on command without feeling or discretion. Termed "CyClones", the alien invasion forces provided the aliens with an unlimited supply of soldiers while the earth's forces dwindled.

All hope seemed dashed until AI Corp brought forth the Enhanced Combat Scouts (ECS) project. Knowing that one soldier, no matter how well-equipped, could never destroy the countless number of alien invaders, AI Corp had another mission in mind. It assigned the ECS prototype the code name "HAVOC", and a simple objective: Disrupt and destroy the communication lines between the alien forces and their commander.

Now it's earth's chance to strike back! 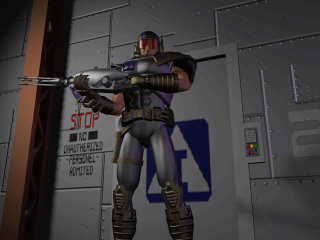