This is a liberated game: it was originally shareware, but on 20 March 2009 Apogee Software/3D Realms released the full version as freeware.

Great EGA graphics and Ad Lib music make this one of Apogee's more popular games. In medieval times the powerful wizard Garth has overthrown the Kingdom. Can you save the Kingdom? A Nintendo-style game with ten scrolling levels. Save/restore.

Rapid fire and health: Press F10 to enable the cheat mode. Then press = for rapid fire or press Backspace to reduce the extra health requirement to 5 coins. 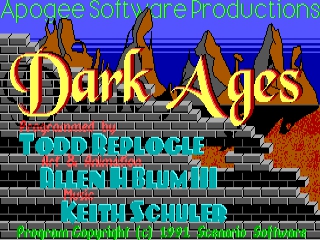