You can play Delvion: Star Interceptor on this website so you don't need to download and install the game on your computer. We recommend to use Google Chrome when playing DOS games online.

Press the fire button (default is Alt) to select menu options. To set the difficulty level, move the cursor in the main menu to the START option, and press the right arrowkey to increase difficulty, represented by the number of triangles. The left arrow decreases the difficulty level.

Delvion: Star Interceptor is a fairly obscure side-scrolling space shoot 'em up for one or two players. The two-player mode is of the hot seat variety, that is, players take turns to fly their ships, without simultaneous play.

The shareware version does not go into much detail about the plot, so the objective is to fly across the screen, blast away enemy ships and other obstacles, and collect powerups that some enemies drop. Eventually you reach the end of the level, and a boss battle ensues.

The ship is controlled with the keyboard or a gamepad (if available), and can withstand several hits from collisions with obstacles before going out. As the game progresses, more weapons can be obtained for the player's ship, increasing its firepower capacity.

Delvion does not play as smoothly as some of the other horizontal shooters like Interpose, SideLine or Nebula Fighter. However, it features nice hand-drawn pixel art graphics in a style reminiscent of console games, and decent music.

The shareware version includes the first three levels out of ten in the registered game. The CD-ROM release also featured CGI animated sequences, the option to select different pilots and ships. 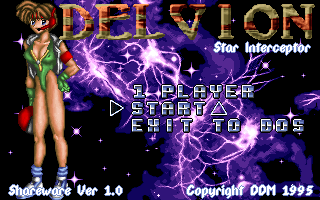