Destruction Derby, based on the metal-on-metal world of stock cars, is the only racing game where reckless driving pays maximum dividends. This title, following a few sneak previews of preliminary video footage, is already one of the year's most eagerly awaited games: Destruction Derby's impact looks certain to be as powerful as its spectacular collisions.

Using a unique games engine the design team has ensured that Destruction Derby replicates, in real time 3D, the carnage and impact of hit and run racing. The aim is not simply to win, but to create as much mayhem and destruction possible. Survival is the ultimate goal.

Exploding debris and smoke add to the game's authenticity, while its 'no rules' approach ensures premium adrenaline. This is a battle to the finish, with the cars realistically reacting to damage and crashes. 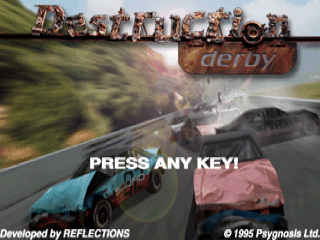