Humor and adventure in Pratchetts' Discworld

In a first from the interactive entertainment industry, a trio of Britain's best loved comedy actors have been signed up to voice-act the PlayStation Game Console graphic adventure, Terry Pratchetts Discworld.

Eric Idle, internationally famed as one of the Monty Python team (and composer of the ubiquitous 'Always look on the Bright Side of Life') records the part of Discworld fan-favorite Rincewind, the inept wizard. He will be joined by Tony Robinson a.k.a. Baldric, of Black Adder infamy (Robinson has already narrated several Discworld 'talking book' audio tapes) and on the most versatile voice-over men around, Jon Pertwee who, needless to say, is known to many fantasy fans as the definitive Dr. Who.

Explains Angela sutherland of developers TWG, "we've fully exploited the potential of CD-quality speech, and using character actors like Eric, Tony and Jon really brings the Discworld humour to life. Plus, their profiles give the game a real appeal to the wider public, rather than just the hardcore games fans"

Indisputably the premium license of 1995, Discworld brings best selling fantasy humorist Terry Pratchett's amazing creations to the PC. Having sold well over 7 million books in eighteen languages world wide Terry Pratchett has been called "one of the best, and one of the funniest, English authors alive" (The Independent). Pratchett has personally participated in the development of a superb graphic adventure which captures the surreal humour of the books, while delivering solid and involving gameplay. 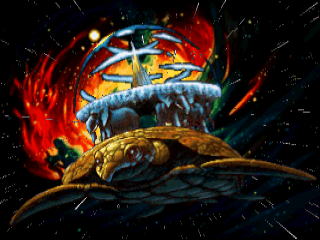