You can play Drone on this website so you don't need to download and install the game on your computer. We recommend to use Google Chrome when playing DOS games online.

Drone is a vertical scrolling shooter with pre-rendered sprites, somewhat similar to Vanguard Ace: Vertical Madness. The typical alien invasion scenario here is spiced up a bit by somewhat altered playing mechanics: the player's main objective is to disarm alien drones sent from their mothership to blow up the Earth.

Unlike many other vertical shmups, in Drone the player's ship can only move left and right, making this more like a classic Invaders type shooter, only with scrolling background.

There are two levels in the shareware version, out of seven in the full game. 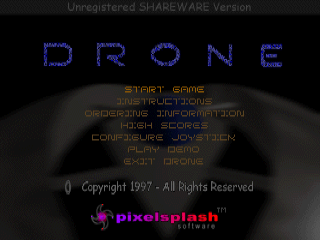