You can play Dstroy on this website so you don't need to download and install the game on your computer. We recommend to use Google Chrome when playing DOS games online.

For one-player game, use the arrow keys to move Boodies around, Enter to place bombs.

Dstroy is a very nice Bomberman like game for up to four players on the same computer, featuring pleasant graphics and a beautiful musical score. There are three game modes: Adventure (single and co-operative story mode for 1-4 players) and two types of multiplayer Tournament, Classic and Killer Tournament.

The game has a rather unusual story that takes place in a world populated by cute ball shaped creatures called Boodies (also in singular), and their nasty counterparts, the Meuries. One sad Boodies unwittingly becomes the cause of a Meuries invasion, and now the Boodies homeland must be saved from these interlopers.

The core gameplay mechanics are similar to those in Bomberman: the player needs to place timed bombs to destroy walls and hostile creatures that roam the levels. Some destroyed walls will reveal bonuses that, when picked up, provide a certain advantage to the player, like the ability to place more than one bomb at a time, increase the radius of the explosion and so on. However, some pickups are actually harmful to the player and work to their disadvantage, which is to be considered when picking up a random bonus item.

The Classic Tournament mode is mostly similar to Adventure mode, but this time it's free for all, and the main goal is to destroy the other players. Killer Tournament removes bonuses and destructible walls, and the level gets flooded with Meuries while the players try to eliminate one another.

Dstroy was originally marketed as shareware, but in the early 2000s Fully Bugged Software made the full version of the game available as a free download from their site. The team is also working on a remake/sequel that runs natively in Windows and Linux, with free prototypes available (please see the links section below). 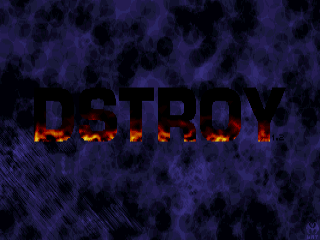