This game requires the full version of Duke Nukem 3D to run.

This is a total conversion for Duke Nukem 3D that was originally planned as a commercial expansion pack to be published by WizardWorks, but then released as freeware.

ZeroHour completely replaces the enemies with new alien types with their distinct behaviours and attacks, and replaces graphics, sounds and names for some of Duke's weapons (but otherwise these remain the same as in the original game). The new episode has 11 levels. 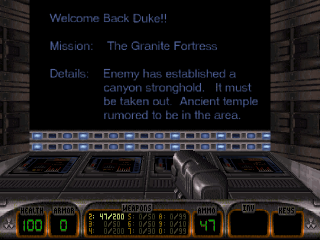