You can play Duke Nukem on this website so you don't need to download and install the game on your computer. We recommend to use Google Chrome when playing DOS games online.

NOTE: This game can be played directly in Windows using a third-party engine recreation (please see the links section below).

An incredible EGA game (VGA compatible) with large animated characters, and huge levels. Your mission is to stop Dr. Proton, a madman bent on ruling the world with his army of Techbots. As the irrepressible hero Duke Nukem, you'll chase Dr. Proton deep into the Earth, then to his lunar space station, and eventually into the Earth's nuclear ravished future.

This is an astonishing Sega Genesis style game with amazing animation! Also features dual scrolling play fields, with huge 3D-like backdrops. Watch Duke somersault and cling on to ceilings as he escapes traps and battles Proton's robot guards. This game is a real show stopper!

This is a game that spawned a gaming legend!

Full gun power and keys: Press both of these keys at the same time: [Backspace]-[PgDn]. You'll get all keys and full gun power.

Debug mode: To activate, start up the game with "asp" as a command line parameter (for example "duke asp"). Then you can press the following keys at the same time during the game to cheat:

G-O-D: Full health and all items
G-O-W: Warp to the next level 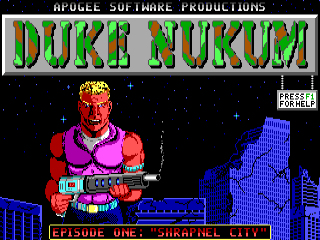