You can play Dungeon Master II on this website so you don't need to download and install the game on your computer. We recommend to use Google Chrome when playing DOS games online.

Years ago, it set the standard for role-playing games. Now, just when the nightmares are starting to fade, it's back... and it's bigger and badder than ever. Introducing Dungeon Master II: The Legend of Skullkeep.

From its storm ravaged villages to trap-filled dungeons you'll face creatures and characters that actually think for themselves and react to your actions. It's the most realistic role-playing world ever created.

Where real-time combat combines with finely-tuned traps and puzzles to test your logic and reflexes to the limit. Featuring an all new version of the interface that defined point-and-click, 3-D sound effects and stunning visual effects, it's the ultimate quest of magic, dungeons and monsters. 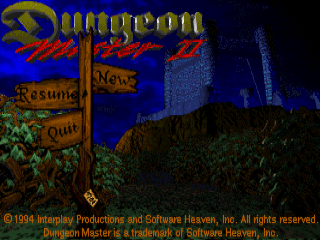