You can play EGATrek on this website so you don't need to download and install the game on your computer. We recommend to use Google Chrome when playing DOS games online.

EGATrek is a PC variant of the popular, originally mainframe game called Star Trek, which dates back to 1971. As the title suggests, it is a fan game set in the Star Trek universe, where the player must fight battles for the Federation as Captain Kirk in the Enterprise. However, the latest releases of EGATrek have removed all Star Trek references to avoid copyright infringement.

The game board represents the map of the known galaxy, divided into 64 sectors, and each sector into 64 quadrants. The player's ship moves around these and tries to save friendly bases from enemy ships of the Mongol Empire. You can fire lasers and torpedoes, the latter can also explode stars, with the resulting nova destroying or damaging everything around it. Combat and movement are turn-based and only via keyboard input, so to move around you need to input coordinates on the galaxy map.

EGATrek is sold as shareware. 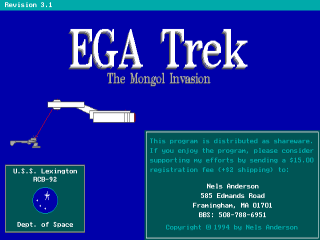