You can play Enigma on this website so you don't need to download and install the game on your computer. We recommend to use Google Chrome when playing DOS games online.

Enigma is a brick-breaking game in the style of Breakout, but with several twists. First, the player's paddle visibly takes damage from falling objects and will be destroyed after several hits. This complicates the task of watching the ball as almost anything that falls down from the screen must be avoided if possible, save for bonuses.

Another unique feature is the "warp holes" that randomly appear on the screen and suck in anything that comes near them. If a ball gets into a warp hole, it will disappear for a short while and then reappear elsewhere. The third feature are minigames that can be played if a special bonus is picked up. The player can choose what kind of reward there will be if the minigame is won, counter-baanced by a random stake that is being bet (e.g. winning an extra life against losing a certain amount of points).

Enigma was originally marketed as shareware but on 6 March 2005 the authors made the full game available as a free download. 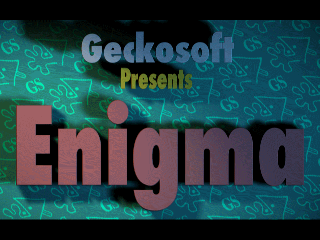