You can play Eol! on this website so you don't need to download and install the game on your computer. We recommend to use Google Chrome when playing DOS games online.

Press arrow keys to move Eol around, Ctrl to fire and Alt to jump.

Eol! is a side-scrolling platform game with cheery, colourful cartoonish art and an easy learning curve. You control Eol, the cute yellow little creature (possibly a chicken), on a quest to rid the land of an evil wizard and his cronies.

The game is made in the traditional Family Production art style reminiscent of children's animated series, with a great detail to character design and animation. Eol! has fluid controls and does not have annoying elements like hard-to-perform timed jumps or swarms of enemies and projectiles that have you mashing at the keyboard in helpless frustration.

The trademark Family Production characters, Py & Gity, make a cameo appearance as you start the demo, and another upon exit. 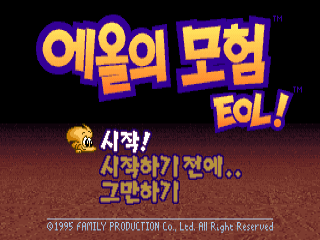