You can play Escape from Delirium on this website so you don't need to download and install the game on your computer. We recommend to use Google Chrome when playing DOS games online.

Escape from Delirium is a point-and-click adventure game very similar to LucasArts' games like The Secret of Monkey Island in look & feel, but deliberately trying to be as eclectic, unpredictable and outlandish as possible. The game starts in 1948 somewhere in the US as young archaeologist Paul Cole sets off to investigate a mummified corpse that has been discovered in an abandoned subway tunnel. From here, things start jumping from one unbelievable plot twist to another, and soon Paul is stranded somewhere in jungle with only his wits to help him out of his predicament.

Gameplay is typical of point-and-click adventures, you move Paul around with the mouse and use several generic commands (look at, pick, drop, use, push, talk) to interact with the environment. To progress through the game, you need to solve puzzles to remove obstacles, which involves finding and using items that lie around or their combinations. The puzzles seem pretty straightforward and can be solved by applying logic/common sense and/or trying out the possible combinations of items in your inventory.

While the story is full of non-sequiturs and strange events, it appears to be much less, if at all, aimed at light-hearted humour and jokes than LucasArts or Sierra titles, with a generally darker tone and casual depictions of violence, however at no point does it turn into horror or pure macabre.

The art in Escape from Delirium is only slightly below commercial quality, which is quite remarkable for a shareware game created by a small group of part-time developers. There are very nice animations for transition between scenes and zoom-in effects which are used both in animated cutscenes and in the game itself (press the right mouse button at any time during play), which hint at a possible relation of the developers to the demoscene.

Escape from Delirium was marketed as shareware, with the unregistered version containing only a portion of the areas from the full game. There are otherwise no limitations, the game may be saved and loaded at any point, and played for an unlimited time. The language may be set to either English or German via the setup utility, with the latter being the original native language of its developers. 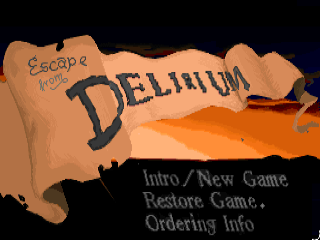