You can play Evets - The Ultimate Adventure on this website so you don't need to download and install the game on your computer. We recommend to use Google Chrome when playing DOS games online.

Evets (which is apparently the developer's name spelled backwards) is a top-down, party-based fantasy dungeon crawler with text-mode graphics. It has some similarities to Rogue but isn't a pure roguelike game, as the player controls a party of characters, and level layouts are apparently not randomly generated (at least, not all of them).

The player's party can have up to four characters, either fighters or spellcasters. Their default equipment may and should be changed for something better by spending the starting sums of gold in the shop. Dungeon exploration is done step by step like in Rogue, with more of the map gradually revealed, while combat is carried out in phases on a separate screen, where the player gives orders to each party member and then watches the fight play out, with the outcome quite dependent on the random number generator. Each battle won is rewarded with experience points and gold; with enough experience, characters can level up, but for that they need to visit the review board at the dungeon entrance.

Evets was distributed as shareware. 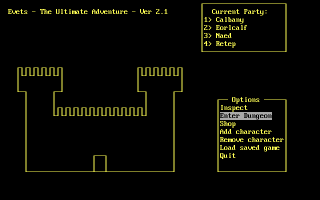