In Excelsior Phase One: Lysandia, you take on the role of a "Fixer," a demi-diety under the employ of the Grand Council of World Watchers - a group of dieties who created and oversee the multiverse. Unbeknownst to the inhabitants of the many worlds of the multiverse, history is predetermined by the Watchers. Occasionally, however, something goes awry and history veers off its planned course. It is the job of the Fixer - donning an appropriate guise - to travel to the world in question and set history back on course.

Lysandia has for generations been a prosperous land and its ruler, King Valkery, is immensely popular. Popular, that is, until he abruptly underwent a startling personality shift and began behaving erratically. Terrible monsters were unleashed. The citizens are discontented. The cause of Valkery's madness is a mysterious chaotic entity that has taken control of his mind. Donning the guise of a normal townsperson, you, the Fixer, must find and vanquish this chaotic entity from Lysandia and restore the benevolent King Valkery to power . . . 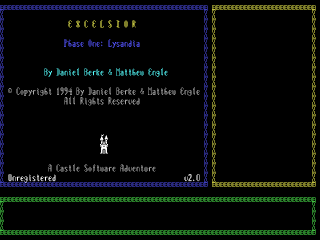