You can play FaroCar on this website so you don't need to download and install the game on your computer. We recommend to use Google Chrome when playing DOS games online.

To install and play the Win3.1 versions on a Win64 host system, you'll need winevdm (please see the links section below).

FaroCar is a block-pushing puzzle similar Sokoban, with colourful high-resolution tiles and soothing Baroque music. The rule set is the same as in Sokoban (you need to push all objects into specially designated places), except that each level additionally contains a bomb that may be used once to clear any walls around the player character when deployed. The game counts the player's moves, and allows to undo any move by pressing the space bar in case you push a block somewhere from where it cannot be retrieved.

FaroCar is originally a DOS game, but was eventually ported to Windows 3.1 and then to Windows 95. It was marketed as shareware, with the unregistered/demo version only containing a few levels.

There are several different tile sets and background images, which are selected randomly every time a level is played, adding some superficial variety (this was changed in the Windows releases, where each level uses a fixed tile set). The player may select one of three difficulty levels, or choose any level to play, in addition to the save game feature. There is also a built-in level editor. The game is entirely in French. 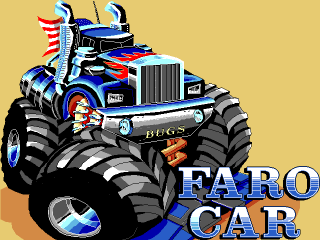