You can play Fire and Ice on this website so you don't need to download and install the game on your computer. We recommend to use Google Chrome when playing DOS games online.

Press Space bar to fire, O and P to move left/right, Q to jump and A to duck.

Fire and Ice is an originally Amiga arcade platformer featuring Cool Coyote who lives in an igloo on the North Pole but is tasked to defeat a bad guy and his minions threatening to take over the Earth.

Cool Coyote attacks enemies with ice pellets that will freeze them, and must then touch the frozen figure to shatter it. Touching an active enemy will instantly take away one life, but Coyote immediately respawns at the same place if there are lives left. More powerful but limited weapons become available as the game progresses.

The game world is split into several differently themed episodes that represent countries where Cool Coyote goes. Each country (or "level") consists of up to five lands ("maps"). To complete a map, a key must be assembled from shards dropped by certain enemies. That will unlock the level exit. There is a day/night cycle, and if you delay for more than seven days and nights in any one map, it will become much harder to complete.

Sometimes the hero is accompanied by coyote puppies that cannot be controlled directly but will attack and shatter enemies just like the player does. Successfully guiding these helpers to the exit will yield an extra life. 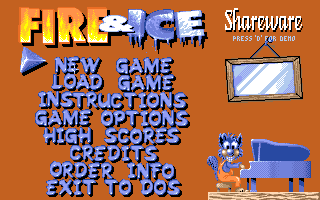