You can play Flame Storm on this website so you don't need to download and install the game on your computer. We recommend to use Google Chrome when playing DOS games online.

Flame Storm is the sequel to The Walls of Bratock, picking the story up where the first instalment left. Bratockians make peace with the Shakyrs, but the land is suddenly attacked by an army of trolls who are impervious to normal weapons. As the Walls of Bratock fall to the onslaught, the king summons the adventurers and tasks them with enlisting the help of a knightly order to fight off the invasion.

Flame Storm plays very similarly to the first game: you control a party of up to six adventurers, but only start with two, the player character and their companion, Isaac Bratock, who now provides helpful hints and generally steers the player towards their goal. More characters join the party later on.

Unlike The Walls of Bratock, the game world is now rendered in an isometric perspective with limited character animations, visually more similar to later Ultima titles, or games like Ultizurk III: The GuildMaster's Quest. The pure top-down view is only reserved for the combat screen.

Talking to non-player characters (NPCs) is still accomplished by typing keywords, with general topics like asking for name and job to start the conversation, and more specific keywords to be found in an NPC's responses. However, NPCs often seem to have only one or two specific things to say and will not provide responses even for topics they should be knowledgeable of from their supposed background.

The shareware demo contains only the first chapter of the story, with the six other available in the full version of Flame Storm. 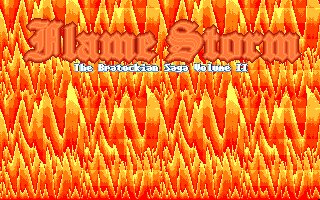