You can play fRaBs on this website so you don't need to download and install the game on your computer. We recommend to use Google Chrome when playing DOS games online.

This game has been ported to Windows and can be played without the need for DOSBox (please see the links section below).

fRaBs is a community made game based on the source code of Crack dot Com's Abuse. It is essentially the same game, but with completely new user levels and artwork. Only the shareware version levels, art and sound effects from the original Abuse remain, as these assets were released into the public domain by Crack dot Com alongside the source code.

Apart from the original shareware levels, fRaB contains several episodes made by different authors. They are all accessible from the starting hub level (which replaced the tutorial level from Abuse), via teleporters. Some of these are harder to reach than others because they are guarded by monsters, and the level offers rather limited ammo.

The difficulty level is on the whole notably higher compared to the original game. fRaBs supports user maps, episodes and mods created for Abuse. 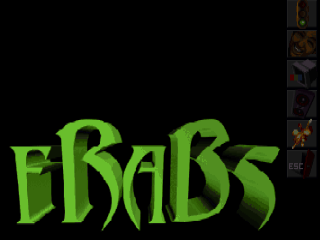