You can play Fracas on this website so you don't need to download and install the game on your computer. We recommend to use Google Chrome when playing DOS games online.

Fracas is a Bomberman style arcade game for up to four players featuring wizards and magical creatures. The core mechanics are very similar to Bomberman: the wizard finds himself in a labyrinth filled with dangerous monsters, and must carefully use spells to clear each level of these hazards.

For this purpose, cauldrons with spells are placed on the ground which explode after some time, destroying both rocks, monsters and the wizard as well should he remain in the path of the blast. Some rocks will reveal powerups when destroyed, which increase spell power, add lives or boost other abilities of the player. However, removing rocks may open new paths for the roaming monsters, which are usually isolated from the player by obstacles at the start of a level. While monsters do not actively seek out the wizard, they will move along any free path they find, and also destroy any powerups in their way if the player does not pick them first. There are other hazards including one-way tiles or lightning bolts that block the way.

Fracas was originally sold as shareware, with only a few levels available in the unregistered version. On 6 March 2005 the authors made the full game available as a free download. 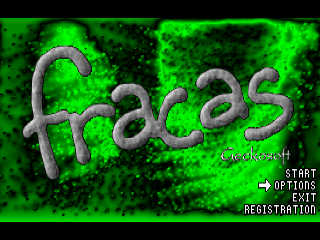