Fury of the Furries

You can play Fury of the Furries on this website so you don't need to download and install the game on your computer. We recommend to use Google Chrome when playing DOS games online.

Whenever you get more than one Tiny, press down to switch between them. Space bar uses the current Tiny's power.

Fury of the Furries is a puzzle platformer game similar to The Lost Vikings. You control up to four different Tinies -- fluffy round creatures that are popular toys in Europe -- one at a time, each Tiny having different special abilities:

Using these, you need to navigate to the end of each level in a limited amount of time. The story is that the Tinies need to save their king and their homeworld from an evil Tiny who took control by transforming the rest of the population into mindless drones.

The game was re-released as Pac-in-Time in North America because Pac-Man was more familiar to the audience there than the Tinies. 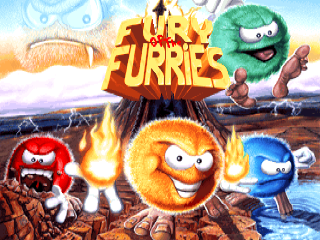