You can play Gene Splicing on this website so you don't need to download and install the game on your computer. We recommend to use Google Chrome when playing DOS games online.

Gene Splicing is another freeware sci-fi RPG from the creator of Psionics Adam Stanchos. It is a turn-based game similar to early computer role-playing titles like The Bard's Tale or Ancients 1: Death Watch where the world is rendered in very basic first-person perspective that only shows the level layout, while various encounters and interaction with NPCs are displays as separate drawings, sometimes with limited animation.

The story of Gene Splicing takes places in a not very distant future where mankind started spreading throughout the nearby celestial bodies, and an entity called the Space Security Agency (SSA) was established to maintain order in off-world settlements. As a new recruit into the Agency, the player character arrives at their Moon HQ for basic training, to be eventually joined by other agents and sent on a mission that involves genetic experiments. 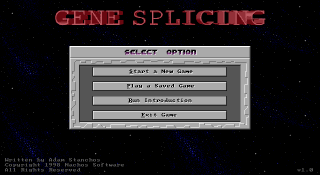