You can play Giddy 3: The Retro Eggsperience on this website so you don't need to download and install the game on your computer. We recommend to use Google Chrome when playing DOS games online.

Press Q and W to move left/right, P to jump, Space bar to view and use inventory. To pause the game, press F12. While paused, you can press Esc to exit back to the title screen.

Giddy 3 is an arcade style side-scrolling running and jumping game with colourful, cartoonish visuals. You control an anthropomorphic egg with hands and feet who runs and jumps around, collecting coins and other useful items, and avoiding various hazards and nasty creatures. The game pays homage to the popular Dizzy series (and specifically, Fantastic Dizzy), which also features an anthropomorphic egg character.

The previous two Giddy games were only released for Amiga and do not have PC versions.

Giddy was released as a free game in 2000, and in 2009 the source code was used to port the game to Windows and other platforms, including mobile devices and Nintendo Wii. 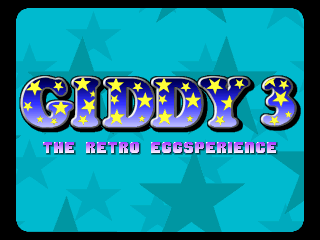