You can play Gondwana on this website so you don't need to download and install the game on your computer. We recommend to use Google Chrome when playing DOS games online.

Arrow keys to control Han, Ctrl to jump and Alt to attack. Press P to pause the game, Esc to exit to DOS. Pressing F2 to F4 will decrease screen size, F1 back to full screen.

In DOSBox, the game runs well at maximum cycles.

Gondwana is a side-scrolling platform game taking place in prehistoric times (but you wouldn't tell), back when the eponymous supercontinent of Gondwana had not yet fallen apart. The planet was populated by extraterrestrials and who built their colonies, and in one of them lived the protagonist, Han.

The story begins as all of a sudden, vile creatures begin to appear and soon spread everywhere throughout Gondwana, with Han setting out to destroy them and restore peace. Gameplay is fairly typical for the genre, with careful timing required for jumps and attacks.

Gondwana was created in 1996-1998 by one person, Elvis Enmanuel Castillo Núñez, initially for a magazine contest. Attempts to sell it as shareware proved unsuccessful and the game was only rediscovered by the author in 2015, and eventually released as freeware. 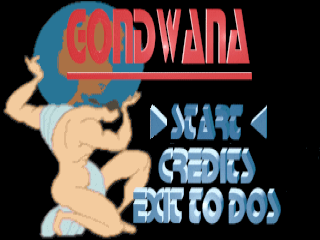