You can play Green Beret PC on this website so you don't need to download and install the game on your computer. We recommend to use Google Chrome when playing DOS games online.

If the game runs too slowly in DOSBox (including the play-in-browser version), press Ctrl+F12 repeatedly to increase the amount of emulated CPU cycles.

Use the arrow keys to move around, press Left Ctrl to attack with the knife.

This is an unofficial DOS conversion of the 1986 Commodore 64 game Green Beret. The player controls the eponymous Special Forces operative on the mission to infiltrate an enemy compound and rescue allied captives. The Green Beret is only armed with a knife and needs to act quickly to overcome the enemy forces, and the compound is crawling with guards.

There are four stages in the game: Missile Base, Harbor, Bridge and Prison Camp. The guards run around and shoot randomly, but the Green Beret can avoid shots by ducking or jumping. Take care not to touch the guards either. Unlike the original game, there appear to be no other weapon pickups in this version, only the knife. 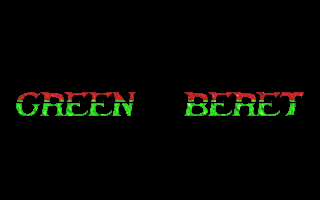