Hammer of the Gods

You can download the full version of Hammer of the Gods from the download store listed below.

Hammer of the Gods is a turn-based strategy game set in the worlds of Norse mythology. The player controls a tribe of Vikings striving to gain favour with the gods of the Norse pantheon. To do so, quests must be completed for individual deities while exploring the world, settling new areas and making war with other tribes. 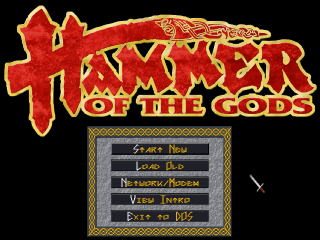