You can play Heartlight on this website so you don't need to download and install the game on your computer. We recommend to use Google Chrome when playing DOS games online.

The game seems to produce the best quality sound and music when using the DAC on LPT1 setting.

Heartlight PC, originally and Atari game, is a Boulder Dash variant that is very similar to Trugg, with emphasis primarily on puzzle-solving by carefully manipulating game objects, rather than simply navigating a maze with boulders and treasure (in this case, represented by hearts).

Like in Trugg, each level takes exactly one screen, and you have unlimited tries and no countdown timer. The puzzles get tricky rather quickly, some may require several tries to figure out when playing for the first time.

Heartlight was developed by a small Polish team and originally marketed as shareware by Epic MegaGames in the Epic Puzzle Pack bundle. In 2006, the original developers declared Heartlight freeware alongside their two other games, Robbo and Electro Man. 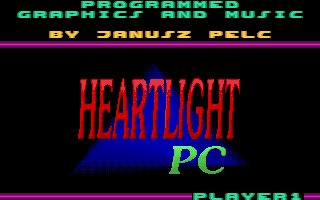