The Slob Zone is under the control of Bob the Slob, the leader of the Hardcore Union of Radical Litterbugs, an army of oversized animals. Bob the Slob has stolen all the world's clean underwear, and sends his dirty minions against the one brave hero who dares to venture into his realm and reclaim the stolen goods.

H.U.R.L. is a non-violent action game that uses a first-person perspective and 3D graphics reminiscent of first-person shooters. Instead of shooting enemies, however, the protagonist washes them. Soap, water balloons and deodorant can be found or acquired at vending machines, trading collected rubbish for them. Animals try to hit the hero with various kinds of dirt, to which he reacts with cleaning; after having been assaulted with cleaning utensils for a sufficient amount of time animals surrender. 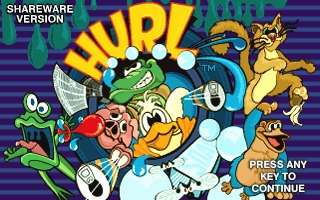