You can play Indian Commander in Robot Confrontation on this website so you don't need to download and install the game on your computer. We recommend to use Google Chrome when playing DOS games online.

For optimal game speed in DOSBox (including the browser version), press Ctrl+F12 repeatedly to increase emulated CPU cycles to about 20.000.

Indian Commander in Robot Confrontation is a very simple but charming side-scrolling platform game. The eponymous Indian Commander is tasked with destroying battle robots that are being tested by hostile aliens. You can jump, run, duck and shoot a powerful gun with unlimited ammo, but defeating the robots is not a walk in the park still.

The game plays very smoothly, but only uses PC speaker sound effects. The graphics are simple but look good, and there is a save/load game feature as well. 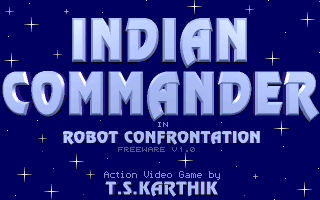