You'll face a game playing challenge like nothing you've experienced before, as you battle your way through an unending army of bio-mechanical warriors, powered by nerves of steel, the strength of metal and Iron Blood.

It is the future. A group of scientists have discovered a way to manufacture mechanical parts in place of human organs and the realisation of decades of research has finally reached its fruition.

But scientists aren't the only group to recognize the potential of this powerful new bio-technology. In the quest for the ultimate man/machine combination, a struggle has developed between government forces and an evil criminal organization, who crave the technology to create a new generation of cybernetic warriors.

You are a law enforcement agent assigned to deal with threats to world security. Armed with a cybernetic "Bunker" robot, an arsenal of special attack moves and an array of devastating weapons, you must liberate the captured Organism Research Center and smash the crime syndicate, before the new technology falls into their hands.

It's up to you to protect and serve as dazzling sound and riveting effects bring all the mind-blowing, futuristic action to life. Unleash the fury of a devastating killing machine, as you clash in a flurry of mesmerizing visuals! Experience the feeling of scorched metal and smashed circuitry in non-stop, arcade style action! 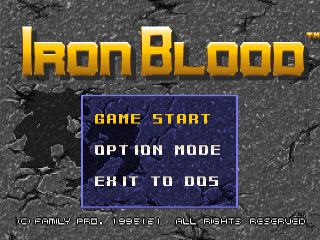