You will need DOSBox to install and play Island Conquest II, unless you still have Windows 95/98. You will probably (or most likely) have to speed up the cycle speed of DOSBox to around 5300 cycles, or the screen transitions for install.exe, setup.exe, readme.exe and the game itself will run really slow. Installing can be done in a directory of choice.

Once you have installed the game (install.exe), you can run setup.exe in order to select your CPU (preferably leave it at 386), and set your input control (keyboard or mouse). A readme.exe file is also present, with extensive instructions about gameplay and some miscellaneous information.

Type isconq2 (isconq2.exe) to start the game. Once you get to the loading screens, press any key to continue to the next screen. This is not mentioned as an in-game hint, but was customary back in the 'old' MS-DOS days of playing games, so hints were not necessary.

You are the sibling of a sailor who washed ashore many years ago (Island Conquest I). Your father found twelve tribes, engaged in war. He felt it was his duty to reunite the tribes, and succeeded. Now your father has retired, and with the absence of a great leader, the tribes are at war again. It is up to you to reunite the tribes once more. You do so by conquering the other villages and islands.

Island Conquest II is a turn-based strategy game, in which you have to 'produce' and train warriors in order to be able to attack other tribes. You also have to gather wood to upgrade your village, and gather food or everyone will die of starvation. Once you have conquered all villages on all islands, you will have reunited all the tribes, and the game ends there.

There's one cheat available (only accessible if you've set your input control to keyboard). Type 'dek' (without the single quotes) in the main game screen and tap left or right arrow. All the amounts of warriors, strength, food and wood will be set to 255 for that particular village. 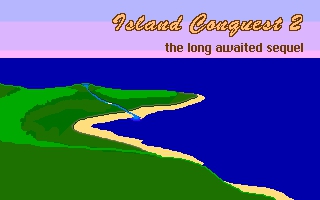