You can play Izmir on this website so you don't need to download and install the game on your computer. We recommend to use Google Chrome when playing DOS games online.

Izmir is an on-rails third-person shooter in a futuristic setting. The eponymous Izmir is the name of the world state that emerged in the 21st century, which is at war against a paramilitary criminal organisation.

The player controls a fighter in powered armour who must plough through advancing hordes of enemy robots. You constantly move forward and can only step sideways, but also use a jetpack to fly over obstacles. Ammo is finite and you need to keep an eye on powerups and/or switch between available weapons. 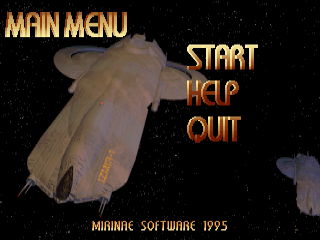