You can play Jaguar GR1: Strike Force Delta Zulu on this website so you don't need to download and install the game on your computer. We recommend to use Google Chrome when playing DOS games online.

Make sure you read the instructions and check the in-game control key reference accessible from the main menu.

The game menu does not work in the browser so you'll be taken straight to mission 2.

This combat flight sim puts you in the cockpit of a British Royal Air Force (RAF) Jaguar GR1 jet fighter-bomber during a fictional joint military exercise with former Soviet Union armed forces. Fly various missions, including strikes against ground targets, defence and interception of enemy aircraft. The game was created with Domark Software and Simis' Flight Sim Toolkit and has commercial quality production values coupled with well thought out flying models of the aircraft involved. The game world is highly detailed, and scenarios take advantage of sophisticated AI routines, including friendly aircraft flying missions with you.

There are ten scenarios which may be played in any order. The main menu also allows to view some of the plane models from the game in high resolution.

Jaguar was developed by Ron Walker and released as freeware. 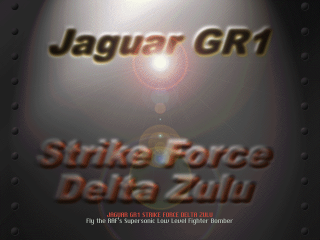