NOTE: The demo is for DOS but comes with a Windows installer. After installation, be sure to patch the demo, otherwise it might not work.

April 2006 - Scandinavia. An enormous oil reserve has been discovered off the northern coast of Scandinavia near the Russian-Norwegian border. The field lies in the Barents Sea in an area which has been the source of a long-standing dispute between Norway and Russia. Despite Russia's claims to territorial waters in the region, the Norwegians begin deep-sea drilling in the disputed waters. As a result, Norway enjoys a never-before-seen state of economic prosperity.

Meanwhile, in Russia, economic hardships have led to a massive Depression. Strikes and protests continue to erupt in the major Russian cities. In the port city of Murmansk, along the Barents Sea, the Russian military stages a shut down to protest the government's inability to pay them. In response, Russian President Andre Yakhmonov calls for the "downsizing" and partial disbanding of much of the military. Within this harsh economic and political climate, General Alexander Krugov leads a secessionist movement which breaks away from the Moscow-led government. Centered in Murmansk, this military splinter group seizes upon a bold plan of action designed to jumpstart the Russian economy: They will send their Rapid Response Units into the Barents Sea to lay claim to the Norwegian oil sites.

Soon, Krugov's gambit will throw the world into war, and the deadliest modern air battle ever witnessed will erupt between the United States Navy and the Russian Air Force.

JetFighter: Full Burn combines an engrossing interactive story with the furious action of a modern combat sim in an extensive campaign playable from both the American and the Russian sides of the conflict. This latest installment in the acclaimed JetFighter series features authentic high-tech fighters, terrain derived from actual government topographical data and multi-player support. 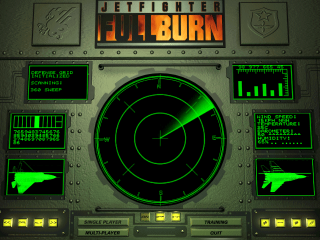